I gave her crap later for keeping her watch on.
Posted by austinspace at 10:53 AM No comments: I was lucky enough to use actual studio lights at work on Thursday. It came up because Alina needed some studio shots to turn in to an agency, and I had just been told my colleague Eric had an impromptu studio setup a couple of buildings over. So I called him and he was kind enough to meet us and set up the lighting and get my camera set to use. Otherwise I'd have had no clue whatsoever what I was doing!

There is a spot behind her left shoulder, up quite high, a reflector just off screen on her left, and a monster light with a grid-thing on it to her right. I'm standing about 10 feet back in front of her, trying not to pull the cords out of their sockets, snapping away. From start to finish we were there for just over an hour, nearly half of that setting up!

I think they came out just great--I was on a photographic high after we finished, and we were walking back to my office. I'm working on cropping them right now so she can print out a few to hand in.

Posted by austinspace at 5:11 PM No comments: Posted by austinspace at 4:09 PM No comments: Posted by austinspace at 12:57 PM No comments: Posted by austinspace at 3:16 PM No comments: Posted by austinspace at 1:12 PM No comments: 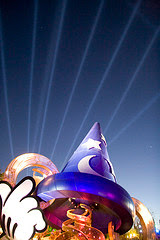 Disney/MGM Studios, Disneyworld, Florida. At dusk.
Posted by austinspace at 11:31 AM No comments: Posted by austinspace at 5:51 PM No comments: Posted by austinspace at 10:35 AM No comments: